Flemish Giants are easily recognizable & quite distinguishable from other breeds of rabbits. Most commonly, Flemish are world-renown for their long, erect ears and their substantially large size. In addition to this, they have big blocky looking heads with bright bold eyes that are fully complimented by long, noticeable eyelashes. When they are sitting in a resting position on a flat surface, starting from the base of their shoulders, they have a gradual rise that transitions across their wide midsection to their massive, broad hindquarters which continues in a smooth descent, over the hips, to a rear end that sits flatly on the table-top.

Their front legs will be very large, within proportion to their bodies, which will also be quite visible. However, their hind legs, while they are equally massive & very powerful, will not usually be as visible because they will be tucked up under their sides. The typical reaction of most people who see their first Flemish in person is that of awe! Those first comments are almost always some version of “WOW! That is one BIG rabbit”; many will also add “that is bigger than my dog!” Both statements are not an exaggerated truth, though are they favorites that the owners of these amazing giants just love to hear.

Each & every one of these gentle Giants has his or her own personality. They are very inquisitive, & they are quite intelligent. They will often stand up on their hind legs & stretch their bodies out so that they can see what is around them. This is a common greeting as well, especially when they are buttering up their owner for a good ear-scratching or head-rub. It also goes without saying that the more attention they get, the more they will want. They will play with toys too, rolling them around by using their front paws or some nose-nudging, picking them up with their teeth, & most of the time will follow through by tossing it in true bunny-fashion. If your big buddy is quite fond of you, or just in a playful mood, he may even bring his toy to you in the manner a dog would, when playing fetch. However, they will also let you know when they are aggravated or upset, be it with you or for any number of other reasons. This may be done by completely ignoring your greetings, turning their back to you & refusing to acknowledge that you even exist at that very minute, or – if they are really ticked off, you can expect some loud thumping from those heavy hind feet & possibly adding in some grunting noises while they are demonstrating their unhappiness. Although some Flemish are more vocal than others, they all do possess the ability & will, at some point, be making known their wide array of sounds.


As true with many other domesticated animals, Flemish tends to be one of two ways when it comes to house-keeping & bathroom habits. Furthermore, it will not take long to figure out which ones are complete slobs, & which ones are very neat and tidy. However, in most cases, even the complete slobs will make a turn for the best when presented with the right training & encouragement. These big bunnies also recognize their names when you call to them; many will come to you when you call them by name. Equally, if you raise your voice or yell at them, you can expect them to give you the ‘old cold shoulder’ attitude in response. This treatment is almost guaranteed too, if your giant pal is feeling jealous – which happens a lot more than you might think. As odd as it may sound, these wonderful rabbits have a deep, natural desire for affection & attention. They love being talked to & they want you to be pleased. They want you to love them, & they will love you back; showering them with attention also helps a lot, as far as they are concerned. It is not at all unheard of for them to physically rub their nose to yours, & they do give some pretty tremendous bunny-lick kisses to those who rate really high on their ‘best friend chart’. In fact, while these amazing bunnies are generally friendly to everyone, more often than not, they will pick one particular human as their favorite. That person will be the one that they will be drawn to the most – & they will make it known who it is that they do prefer.

Flemish Giants have a friendly personality!

There are a few things that Flemish Giants do not tolerate very well. What are those things? Well, first on their list is being picked up. They become very nervous when they are picked up. Therefore the importance of doing so correctly can not be stressed enough. Picking them up is best done by lifting with both hands under midsection. When that is not a possibility, pick them up swiftly, by the scruff (between the shoulder blades), & rapidly tuck them into position; be that onto a sturdy surface, or holding them in the manner of carrying a small human child, with their butt cradled in your arm & their front feet resting on your chest, or in a foot-ball type hold, where their head is tucked into the bend of your elbow, your arm snuggly holding their body against your stomach region while using your other hand to securely support around the rest of their massive body. Once they know that they are secure & safe, they will relax and you can carry them around. Next, they do not like any loud noises, of any kind. To them, this only means ones thing – danger is near! They will run, stomp, jump, scratch, & even bite without warning if they are really afraid. Keep in mind that if these things happen to you, especially if you just brought your furry friend into your home, he is afraid & trying to protect him-self. Don’t take it as a personal attack against you in particular. Brighter, happier days are just around the corner. Be patient & be sure to give your Flemish the best possible care that you can. You will be fascinated with how much you will be richly rewarded for having done so.

OTHER MUST READ ARTICLES: 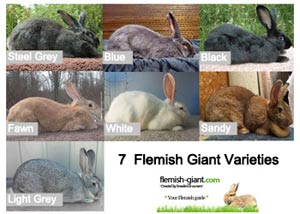